Eat what you buy: Fruits on the edge

Don’t waste money by not eating all the food you have bought. Not only can you search the Web for stories about how people are saving hundreds of dollars a year by not wasting their food, think back to those stories your grandparents told you about making it through the Depression. They didn’t waste anything!

For perishables, make a point of going through your refrigerator every week or two to see what may be on the verge of spoiling‚ then use it before it goes bad. Fruits spoil very easily, but can easily be eaten quickly or used in other creative ways.

If you have apples that have bruises or just aren’t juicy (so you know you aren’t going to eat them) or other fruit in similar condition, you don’t have to throw them out.¬† Making apple sauce or other fruit sauces is extremely easy.

I use a small one quart slow cooker to make apple sauce, but I have heard of other people making it in a sauce pan over a low heat. Plug in the slow cooker and let it start warming while you cut up your fruit.¬† Use an apple slicer to section your apples (if you don’t know what an apple slicer is, see the picture below)‚ it only takes a few seconds per apple with this handy gadget. If you have other fruit that is in danger of going bad, section those as well and toss them all into the slow cooker. Add a little water and then walk away.

Check on it every now and again‚ stir it up so it cooks evenly. Add cinnamon or other spices. When the fruit is soft, mash it with a fork or potato masher. Let it cool and then put it in a storage container (or a few half-cup mini-round storage containers) before putting it in the fridge or freezer.

This trick is definitely not for everyone (this is good enough for me to eat, but not to serve to other people!).

The tools needed for this money saving trick can also be used in other ways: 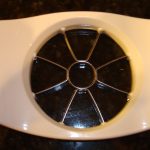 It’s bag cat! He loves being swung around in any

I need more huge trees in my life. ⁣ #muirwoods